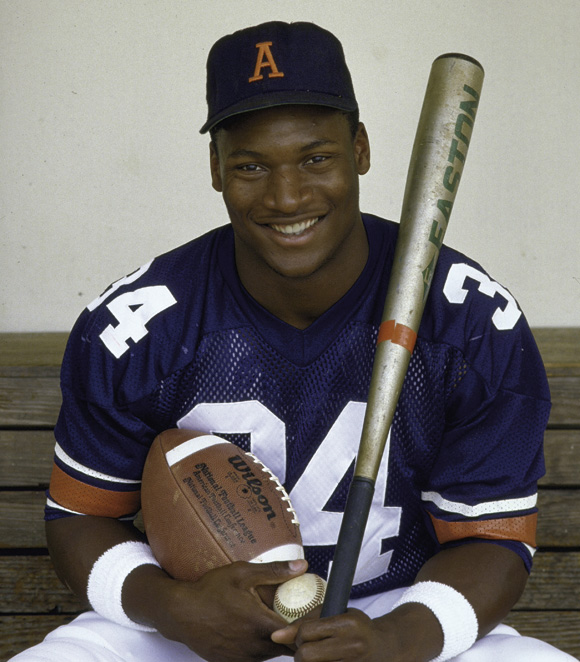 Vincent Edward "Bo" Jackson is no ordinary athlete; a former professional baseball and football player, he is the only athlete to be named an All-Star in two major American sports. With all of Jackson’s success in professional sports, it’s hard to believe there was anything he was not good at. But there’s a reason Jackson often refers to himself in the third person, and why he titled his autobiography “Bo Knows Bo” – saying his own name aloud when he talked about himself helped lessen his stuttering.

Bo Jackson is the eighth of ten kids, three of whom stutter – Bo, as well as two of his sisters. According to a profile in Bleacher Report, Bo developed a stutter as a child and became extremely self-conscious of it. He avoided raising his hand in class, for fear or being made fun of by the other students. Instead, Jackson channeled his confidence to the field, where he excelled from the start. At McAdory High School in Alabama, Bo showed his athletic prowess in football, baseball, and track and field. The New York Yankees were so impressed with his high school baseball career that they drafted Jackson in the second round of the 1982 MLB draft. Jackson, however, opted for college instead, accepting a scholarship to play football at Auburn University. He quickly became a dominant college running back and went on to win the coveted Heisman Trophy.

In a commencement speech at his alma mater, Jackson shared his reticence for speaking in public when he got to college and became a football star. “When I came to Auburn, public speaking was the last thing on my agenda,” he said. “I avoided it like the plague. Even after football games my freshman year I was afraid to get in front of the news cameras to talk because I knew that I was going to get nervous; I knew that I was going to start stuttering and so forth and so on because when I was a kid in class I wouldn’t answer one word answers because I knew that I would stutter and then class would make fun of me and laugh at me.” According to a profile in AL.com, it was during college that Jackson began to work with a speech therapist and employed the now well-known third-person strategy. "Back then, I didn't know what 'third person' meant," Jackson said. "I was just talking about myself. It was the only way I could."

Eventually, Jackson learned not to let the fear of what others would think get in the way of his athletic career. Jackson was a coveted player for both the NFL and the MLB upon graduation. He turned down the largest offer given to a rookie in NFL history with the Tampa Bay Buccaneers to play baseball with the Kansas City Royals. Then, in 1987 – while still playing baseball for the Royals – Bo was drafted to the NFL by the Los Angeles Raiders. From there, Jackson played both baseball and football for several years, earning multiple awards in both sports along the way.

In his speech at Auburn University, Jackson shared the advice that helped him overcome his fears and achieve success: “When I came here to Auburn that’s one thing that my coaches, my professors, my teachers, they taught me. One thing that they taught me was to step outside of your comfort zone and do things that you wouldn’t normally do. That’s what I ask you all to do when you leave here. Step outside of your comfort zone. Take chances -not foolish chances- but take chances, because you never know what the world has for you out there.”

In his speech at Auburn, Jackson told the graduates, “That’s one thing that I always say, if you’re going to set your goals high, put them on the top of the shelf and climb for them. Don’t let anything or anyone deter you from reaching those goals.”