Brain Development in Children Who Stutter 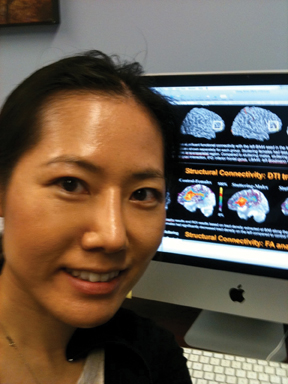 It is well known that stuttering occurs in many more males than in females, but we know very little about what might be the basis for such skewed sex ratio in stuttering.

With the advent of neuroimaging techniques we have begun to unravel some of the possible brain bases for stuttering; however we still do not know why some people recover from stuttering and others don't, and why natural recovery occurs more often in girls than in boys.

With a recently awarded 5-year grant from NIH, my research group at Michigan State University will be working to answer some of these questions by examining how the brain develops differently in girls and boys who stutter. We will also examine what aspects of brain growth leads to recovery versus persistence in stuttering.

In a related previously conducted research study, adults with persistent developmental stuttering, both men and women, were examined to determine how different parts of the brain are interconnected to support speech production. To do this we used MRI methods that enable us to look at what parts of the brain are activated together during speech production, and how they are anatomically inter-connected. We hypothesized that if most girls recover from stuttering, the ones that continue on to have chronic stuttering may have an exaggerated pattern of deficit that is not overcome during normal development.

Results showed that both men and women who stutter had less coordinated activity between the speech motor and planning areas in the left hemisphere compared to the non-stuttering comparison group. Also, anatomical connectivity between these regions was less robust in the stuttering group, particularly for the stuttering women. Stuttering men appeared to have greater connectivity with the right motor regions, but women who stutter were found to have less right-sided motor connectivity.

Because this study was conducted only with adults, it is unclear how much of what we are seeing could be attributed to stuttering itself or to the reaction to stuttering due to decades of stuttering. It is important to examine children who have been stuttering for not too long and track their brain growth to investigate what aspects of brain development lead to recovery versus persistence and whether there are gender differences.

Better understanding of the neural bases of stuttering starting in early childhood will enable us to identify early on those children who are more likely to have chronic stuttering, and will allow us to prioritize treatment for these children. We will also be one step closer to testing treatments that result in lasting recovery for many people worldwide affected by persistent stuttering.