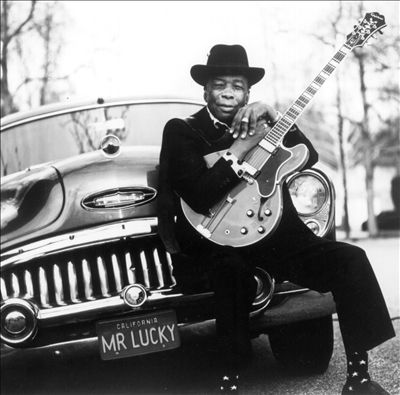 John Lee Hooker, born in 1915, found refuge in music at an early age as he struggled with stuttering from childhood. In the biography Boogie Man: The Adventures of John Lee Hooker in the American Twentieth Century, author Charles Shaar Murray states, “Hooker sounds as if he has $100,000 worth of sophisticated digital goodies built in his chest and his throat. Yet his voice is quiet and muted, its tonal richness offset by a residual stammer and blurred by the deepest alluvial accents of the Mississippi Delta.”

Born in Coahoma County, Mississippi, Hooker rose to prominence with his own adaptation of Delta blues that incorporated electric guitar, and sometimes other elements like talking blues and early North Mississippi Hill country blues. Some of his best known songs include "Boogie Chillen" (1948), "Crawling King Snake" (1949), "Dimples" (1956), "Boom Boom" (1962), and "One Bourbon, One Scotch, One Beer" (1966).

Hooker’s stepfather, William Moore, taught him to play guitar when he was around 12 years old. It was then that Hooker was introduced to what would become his unique style of blues. When he was 14, Hooker ran away from Mississippi to try and make it as a musician. He lived for several years in Memphis, Tennessee, before ending up in Detroit. It was there that he showed up at the office of a record label owner named Bernard Besman and played the owner/producer his demo.

It turns out that Hooker’s stuttering may have helped him stand out; in Hooker’s biography, Murray states that Bernard Besman “claims to this day that his primary reason for deciding to record the young bluesman in the first place was that he was intrigued by the notion of a man who stuttered when he spoke, but not when he sang. “

Murray also wrote in Hooker’s biography that many people did impressions of Hooker and that his stuttering is a big part of why: “Anybody who tells you an anecdote about John Lee Hooker as a young man will inevitably end up mimicking his characteristic stutter.”  Reportedly in the spirit of self-parody, Hooker used an exaggerated stutter when telling stories about himself. This good natured form of self-parody is evident in Hooker's classic 1953 song "Stuttering Blues."

In 1980, Hooker appeared and sang in the now classic movie, The Blues Brothers. As a result, the look of John Belushi's character, Jake Blues, was directly influenced by Hooker's trademark sunglasses and soul patch. Throughout his long career, Hooker recorded more than 100 albums, many of them without any backing musicians or accompaniment of any kind.

Though his stuttering reduced to some degree in his adult life, Hooker is remembered by friends as putting himself and others at ease about his stuttering by being able to poke fun at his speech in a soft way. Of Hooker’s stuttering and vulnerability, Murray wrote: “what may superficially resemble weakness is actually the secret of his success.”