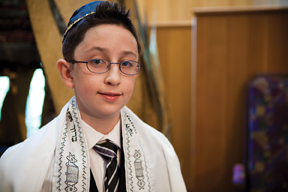 Josh Cohen of Cherry Hill, N.J., wanted to do something special for his Bar Mitzvah last October. In fact, his plans had been in the works since the spring time.

sh to contact the Stuttering Foundation. Josh has stuttered for nearly his whole life, and he told us he wanted to “raise public awareness and help other kids get therapy and access to resources.”

Josh organized two blockbuster fundraisers in his community. One was a car wash held during National Stuttering Awareness Week last May 10-16, and then a Zumbathon followed in June (see story in Fall 2010 Newsletter). In addition, in lieu of gifts at his Bar Mitzvah, Josh asked his guests to donate to the Stuttering Foundation.

Josh recently wrote to the Foundation about his Bar Mitzvah, “It was a great day for me. I was able to complete my Torah portion exactly, and barely stuttered at all!”

“Josh’s thoughtfulness will make a difference in the lives of other young people who stutter,” said Jane Fraser, president of the Foundation. “He is an exceptional and commendable young man.”

-From the Winter 2011 Newsletter