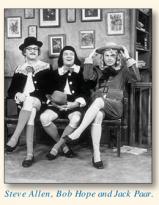 Born in 1918, Paar stuttered from an early age and faced the typical problems of a child who stutters. He described his stuttering in his 1959 autobiography, I Kid You Not. “I didn’t mix much with the other children growing up. It seems strange to me now, when I make my living talking, mostly without written material or rehearsal, but I stuttered badly as a child. This made me ill at ease in school and with other children.

“Like many youngsters who stammer, I lived a great deal in the world of imagination and books. One day I read about Demosthenes, the great Greek orator, who had cured himself of stammering by putting pebbles in his mouth and declaiming over the roar of the sea. Since we were living in Michigan, with no sea handy, I made the best I could do. Instead of pebbles, I used buttons from my mother’s sewing box. And with no sea shore nearer than a thousand miles, I used my room at home. Then I would stuff some buttons in my mouth and practice speaking. I read papers and magazines. I talked about anything that came into my head. I read books, watching myself in the mirror. Apart from once nearly swallowing a shirt button in a burst of oratorical fervor, the system worked very well. Little by little my speech improved.”

At the age of 14, Paar was bedridden with tuberculosis for several months. During this time, the future television legend became obsessed with radio, constantly fantasizing about overcoming his stuttering and becoming a radio star. Every day he hosted “make believe” radio shows in which he was the star.

Paar left school at age 16 to work full-time for a radio station. At first the station only let him announce the words “This is Station WIBM, Jackson”. Other tasks included sweeping the floor and emptying the waste baskets. In his autobiography, he wrote, “They wouldn’t let me do commercials because I stuttered, and the station was so small you could walk out of its coverage area by going down the street for a cup of coffee, but I was a real live radio announcer.”

Eventually the station let him spin records and do a few commercials; though he still stuttered on the commercials, the sponsors actually received a bit more airtime because of it and did not seem to mind. Making radio his life’s goal, his speech greatly improved on the air; and he was finally able to do the news and interviews, developing the “hemming and hawing” style that became his trademark.

After service in World War II, Paar tried his luck at acting and was in several B-movies. He co-starred in the 1951 movie “Love Nest,” with another newcomer, Marilyn Monroe; ironically Marilyn Monroe also struggled with stuttering.

Paar then turned to television, hosting quiz shows and game shows. In 1954, he became the co-host of CBS’ “Morning Show” and in 1957 received the defining role of his career, taking over the reins of “The Tonight Show” on NBC from Steve Allen.

Paar made “The Tonight Show” a staple of American culture. Writing in the New York Times in 1997, critic John O’Connor put it best: “Before Jack Paar, there were various variety shows doing the midnight watch. He simplified the format into a talk show, complete with the sofa–and-desk set that remains a fixture. His secret? Interesting guests, far more so than the celebrity hordes working on product plugs today, and an uncanny ability to listen carefully and actually engage in clever and often witty conversation.”

Fans were shocked and saddened with his leaving “The Tonight Show” in 1962. Retiring early to a secluded life, Jack Paar did the occasional network special. One special, “Jack Paar Comes Home” aired in 1986, and featured Paar talking about his past stuttering problem and how he never gave up trying; urging people with challenges to strive for their dreams and not listen to the nay-sayers.

Jack Paar died on January 27, 2004. Younger generations may not be familiar with him. He not only created the late night talk show format that has been copied by his “Tonight Show” successors Johnny Carson and Jay Leno as well as so many others, but he continues to give hope and inspiration, as well as a sense of pride to the stuttering community.