Boy Rocks It in Musical 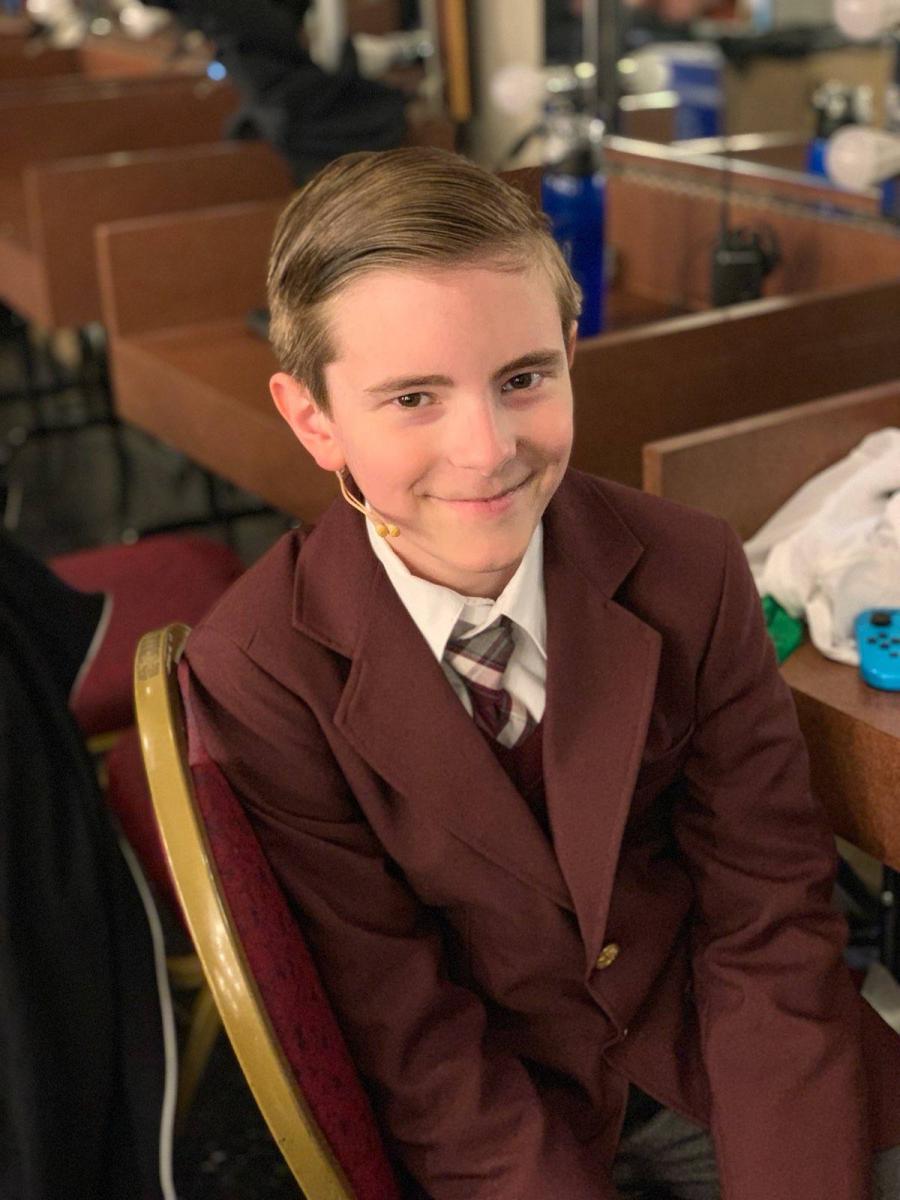 Ever since he was 6 years old, Eamonn Hubert has been performing. While he’s been in countless shows with his dad, thanks to their band Hot Dogs & Gin, this year he performed on one of his biggest stage yet — School of Rock the Musical. While Eamonn,10, was on a U.S. tour with the group, we caught up with him to learn more!

What is the School of Rock the Musical Broadway tour? What is your role?

School of Rock the Musical is based on the 2003 School of Rock movie starring Jack Black about a down-and-out aging rocker who can’t pay his rent and dreams of winning Battle of the Bands. After the band he started kicks him out, he takes a call intended for his housemate, a substitute teacher, and shows up at a fancy prep school pretending to be his housemate and takes the job. He finds that the grade-grubbing kids in his class are also gifted musicians and then recruits them into his band for the Battle. He almost pulls it off, but not quite… Everyone learns that it’s best not to judge a book by its cover and also to be who you are, not who someone else wants you to be and never give up your dreams. Everyone is great at something!

The tour has been going on since 2017 and wraps up this June. I joined in January 2019 and have been in rehearsals since then. I am a swing which is sort of like an understudy, but I will cover 4 different male kid roles when the primary actors are out for whatever reason. There are several child and adult swings in the Company, some of whom know as many as 10 or more tracks or roles! My debut was March 13 as guitar whiz Zack Mooneyham. I was also on as Billy the stylist and then James.

What was your experience with auditions?

The casting associates for the tour saw some YouTube videos of me playing guitar. They contacted my mom and invited me to send in a video audition. I learned the songs and a few lines and sent in my tapes. They then invited me to come to NYC for an in-person audition when I was about 8. It was my first time visiting the city! I got to the final 8 but didn’t get cast. It was disappointing, but they told me they would be calling for me again and they did, about 6 months later. I went back to NYC, auditioned again, got to the final 8 again, but didn’t get cast. Then I sort of forgot about the show and kept performing at home with my band and taking violin lessons. I got a couple of lead parts in my local theater’s productions of Willy Wonka, Jr. and Wizard of Oz. I worried that maybe my stutter was the reason I wasn’t cast, but casting is a complicated process and you just never know what all is behind the decisions.

To our surprise, just before Christmas 2018 my mom got another email from casting inviting me to return to NYC for another audition. This time, I made it to the final 2 boys and got the part!

How did you react when you got the part?

I was SOOOOOO excited and couldn’t believe how lucky I was to get such a hard to get part! I was nervous too because I knew it meant a big change for my family and I needed to get to work! 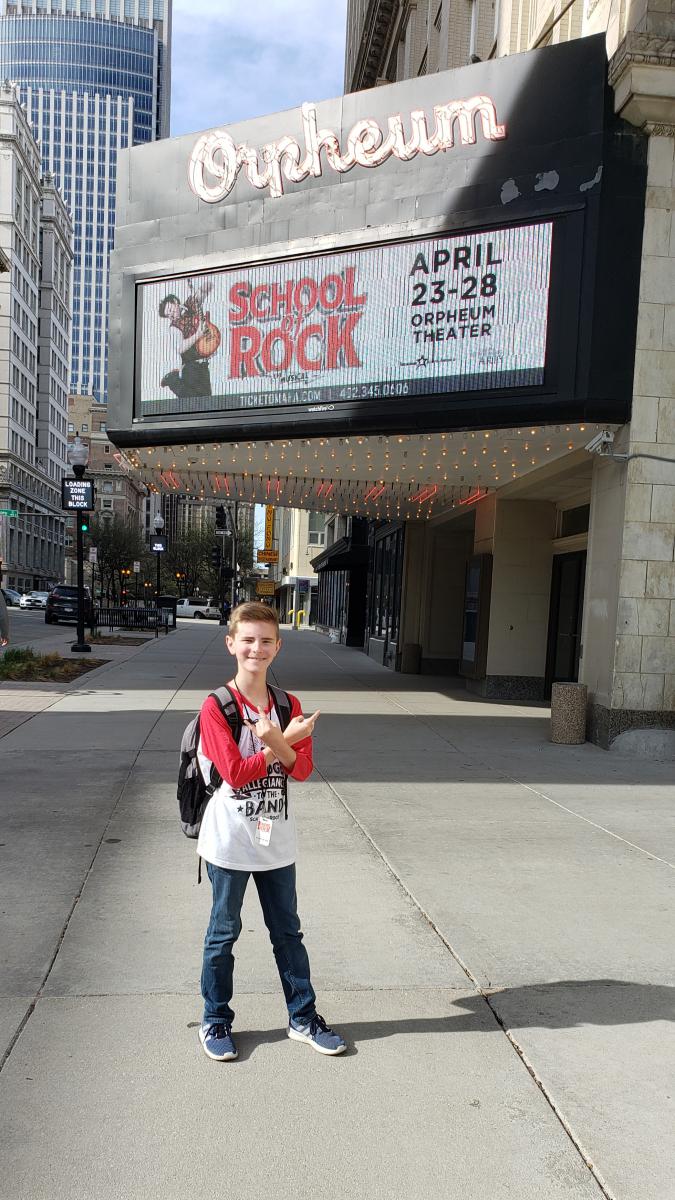 Does your stutter affect you in your role at all?

It hasn’t so far! When I am first learning my lines, I do stutter often. But once they are deeply memorized, I don’t stutter at all when I say them on stage! I did stutter some on stage during my last community theater production, but not with School of Rock.

Do you remember when you first began to stutter? Does it run in your family?

I don’t really remember a time when I didn’t stutter, I think it started around age 4. It came and went then, but it wasn’t long before it became pretty much a constant thing. Stuttering doesn't run in our family – I am the only one that we know of.

Have you sought treatment​? ​Did it help?

Yes, I spent about a year doing Skype stuttering therapy at school and at home twice a week, and I also went to my therapist’s home monthly for individual and group sessions. It was helpful, but I found the slow-stretchy speech techniques strange sounding, so I didn’t like to use them much. What DOES work for me is just remembering to breathe before and while I’m speaking! I stopped therapy on my own last year because I wasn’t making much progress and I decided I don’t really mind that much that I stutter.

Sometimes I feel like people who don’t understand stuttering or don’t know that’s what I am doing might think something else is wrong with me or they get impatient waiting for me to finish what I am saying. Sometimes I wish I didn’t stutter, but it’s mostly for how others see and hear me, not for how I do. I worry that later it might affect me in job interviews, but I can choose to use my tools when I feel like I will need to stutter less.

Based upon your experiences, what would you like to tell other children who stutter?

I would tell them not to let stuttering get in the way of trying things if they really want to do them! I thought my stutter would prevent me from getting an acting role, but I kept trying and hoped the casting people would give me a chance and see me for who I am. There are a lot of actors and other famous people who stutter but not when they are performing, so I think the casting people probably know this. I feel like when I don’t worry as much about how people will react to my stuttering, I am more relaxed. It is part of who I am, and I can control it when I want to, but usually it doesn’t bother me. I just tell people it is like hair color or skin color, it is how my brain works and that’s that!

What else are you involved in? What other activities do you enjoy doing?

I am in my school band (saxophone) and orchestra (violin), and I spend most of my other time playing music or my favorite video games and spending time with my parents, pets, and friends. I drove a go cart for the first time last year, and that was AWESOME! I really love cars and games that simulate driving.

Tell us about your band!

I play lead guitar and sing harmony vocals and sometimes lead vocals in my band called Hot Dogs & Gin.  My dad is the lead vocalist and plays rhythm guitar, and we also have a drummer, keyboard and harmonica player, and bass player. We play mainly blues and classic rock but also a lot of 80’s rock like Bon Jovi and Guns n Roses. My dad and I also play as a duo when the venue or event calls for it. I have been performing since I was 6 and have played hundreds of shows.

What is your favorite part about performing?

I LOVE when the crowd is really into the show. I love ripping guitar solos and can play some note for note but also improvise and play cover songs my own way. It’s a lot of work lugging equipment around and staying up late on weekends, but it’s also a LOT of fun!

What else should we know?

You should know that I’m also on the autism spectrum, have ADHD, and perfect pitch. I call them my superpowers – they can be a pain at times, but they also help me focus, learn, and play music very easily.

Family: I have a 26-year-old sister, Rhiannon, who lives on her own and I live with my mom and dad. My mom is a Probation Officer, and my dad is a high school Science teacher and musician. I have 2 pets: a Golden Retriever named Gibson and an orange tabby cat named Tele’cat’ster.

Hobbies: I like to play Minecraft and driving video games, draw, and build with Legos. I like to re-enact my favorite movie and TV scenes with my cars and other miniatures. I am really interested in cars and auto mechanics.