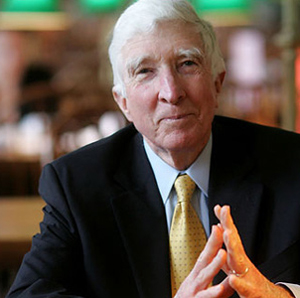 John Updike was an American novelist, poet, short story writer, art and literary critic best known for his series of “Rabbit” novels – Rabbit, Run; Rabbit: Redux; Rabbit is Rich; and Rabbit at Rest. On paper, Updike’s prose was always carefully crafted, each sentence saying exactly what Updike wanted it to. Out loud, however, Updike had a hard time getting the words out; he struggled with stuttering from an early age.

In an interview with The Academy of Achievement, Updike discussed his stuttering: “My father thought that I had too many words to get out all at once,” Updike said. “So, I didn't speak very pleasingly, but I never stopped speaking or trying to communicate this way.”

In the interview, Updike explained how his stutter may have encouraged him to become a writer: “You know, you write because you don't talk very well, and maybe one of the reasons that I was determined to write was that I wasn't an orator, unlike my mother and my grandfather, who both spoke beautifully and spoke all the time.”

Updike indeed became a writer, and is known today as one of the great American writers of his time.  In his memoir, ‘Self-Consciousness,’ he wrote an essay about stuttering called “Getting the Words Out,” where he described the experience of stuttering as “…a kind of windowpane suddenly inserted in front of my face while I was talking … an obdurate barrier thrust into my throat.”

Updike had said that he still stuttered as an adult occasionally, but that it had gotten better over the years.

Updike was a steadfast supporter of The Stuttering Foundation, and "he was readily willing to help us out before it was politically correct to do so," said Jane Fraser, president of the Foundation. "He was somewhat bemused that his picture would appear with other famous people who stutter; but nonetheless, he wanted to help young people who struggled with the same disability he had."

Though he acknowledged how challenging dealing with a stutter can be, Updike also sought to inspire others to accept and look at stuttering with a difference perspective. In his memoir, he wrote, “those who stutter win, in the painful pauses of their demonstration that speech isn’t entirely natural, a respectful attention, a tender alertness. Words are, we are reassured, precious.”