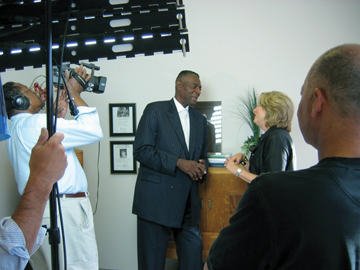 After a career ending back injury he was told by doctors that he would have difficulty walking, let alone play the game he loved. He could no longer hide his inability to speak, and his life spiraled out of control.

Find Yourself A Dream – The Bob Love Story is a one hour documentary about the inspirational true story of Chicago Bulls legendary basketball player, Bob "Butterbean" Love. Written and directed by award winning director, Jim White, its message is about achieving one’s goals, no matter how difficult, and the importance of an education in reaching those goals. It chronicles Bob Love’s battle to overcome his most formidable opponent, his stuttering, to become one of the most sought after motivational speakers in the country.

In Find Yourself A Dream, Bob’s life is depicted through interviews, archival basketball game footage and on-location scenes with family members, old friends, fans, and teammates.

There are on-camera interviews with NBA Commissioner David Stern; Chicago Bulls owner Jerry Reinsdorf; Chicago Bulls superstar Michael Jordan, and others. The documentary also includes a montage of positive and inspirational comments about what Bob Love has meant to them and their sport from basketball greats like Oscar Robertson, Shaquille O’Neal, Bill Russell, and others.